WOW - The Power Of Words

Joanne and I attended a charity on June 7th which took a truly unexpected twist.  We wanted to share our experience.

For a number of years, ‘Missing People’ has been one of the charities that Joanne and I have supported with passion, both personally and professionally.

You may already be aware of them...

You may have seen the emotional performances by the Missing People Choir on last year’s Britain’s Got Talent as they reached the Grand Final.

Or you may have registered to receive Child Rescue Alerts – the nationwide system run by the National Crime Agency and Missing People that was developed by our company, Groupcall.

Last week Joanne and I attended an event with Missing People - NEX Giving Day.  Missing People were just one of the six charities in attendance with the chance of winning a considerable donation from NEX Group plc - a successful city broking company.

Missing People were advised that it would be good if they had a celebrity to support their pitch, so Joanne asked Bob Geldof, one of Groupcall’s founders, to join us at the event, and he agreed.

The format of the evening was that each charity would give a 5-minute ‘pitch’ to the audience of a few hundred people. The audience would then vote for one charity to win the £75,000. NEX had already donated £75,000 to each charity, but the winner would get a further £75,000.

We sat through the first five pitches and they were all important and heartfelt stories with celebrities such as Simon Le Bon and Vanessa Feltz there in support. Finally, it was the turn of Missing People.

Jo Youle, Missing People’s CEO, gave a passionate introduction before the Missing People Choir sang one of their incredibly heartfelt songs. It then came to Bob to say a couple of (pre-prepared) sentences of thanks.

Bob went to the podium and paused, he was deep in thought for what seemed like an age. He suddenly launched into a 10-minute speech asking the audience how could they could possibly choose from “this beauty pageant of misery”?

His speech was personal, searching and emotional. You could hear a pin drop. When he finished -unlike with all the other pitches where there was tremendous applause – the room was muted. No-one had expected what had happened, although it perfectly echoed what I imagine most of the audience had been thinking.

The audience then had to vote for who they wanted to win the £75,000 and it was soon time for the winner to be announced.

The CEO of NEX, Michael Spencer, took to the stage and said he felt that Bob’s words were powerful and true and that he had made an executive decision to give every charity an extra £75,000 each.  The room erupted! It was an electrifying moment, full of emotion and real happiness.

Bob and the other celebrities had already left when the announcement was made, so I called him to let him know. He was pleased and said simply: “That’s the power of words”.

Bob was there on Thursday because of Groupcall and what we do, every one of us. What he did on the night was typical Geldof, but the effect was to help change lives.

At Groupcall, one of our values is to “deliver WOW”.  If that’s not delivering WOW, I don’t know what is. 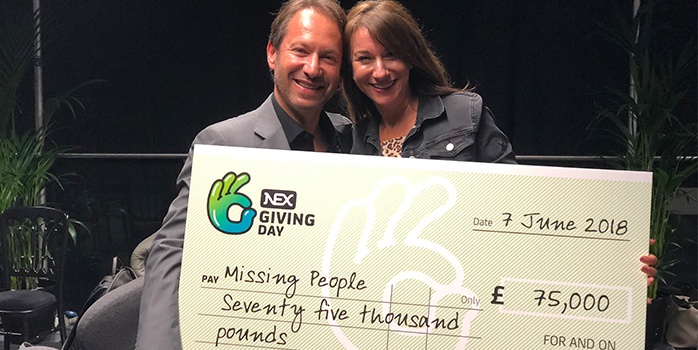