BETT 2018 – A Whirlwind of GDPR, Breaking Stands and Delivering Wow

And so here we are once again, BETT 2018 is done and dusted for another year. I would be lying if I said I was sad, because for any supplier attending the show it is a hard, hard slog just getting to 10am on Wednesday in the North Arena. Developers, testers and product managers have been working solidly for the preceding 4 months and hats off to the marketing team who did an outstanding job getting the stand, materials, interest and special guests all organised on time.

As the doors open, and no more prep will make any difference, it’s over to our salespeople – who for 4 days wear a smile with sincerity (albeit propped up with sticks or sticky tape as doors close each day), greeting everyone from celebrities to industry top-brass, thought leaders, digital gurus, school and business managers, teachers and even learners. And they did such a great job of it too – with a stand consistently busier than in recent years and leaving with a 5-fold increase in sales leads – because the truth is, for vendors, Bett is a gigantic sales event.

GDPR on the Richter Scale

So what was on ‘sale’ this year? Well, the planet-sized elephant in that rather large room was undoubtedly GDPR. I walked around the arena both before and during BETT to try and get a feel for what the GDPR messages were from suppliers. I really didn’t see anything worthy of mention outside a handful of vendors.

Whether sexy or not, GDPR is the biggest shake up of the data industry, and it is happening this year yet there was virtually nothing on how vendors or their software was compliant. It would have been the ideal opportunity for schools to grab a compliance sheet from each supplier they use to take back to DPOs for collation and scrutiny.  An opportunity wasted. As you might expect, Groupcall had prepared GDPR compliance documentation – and this is available here.

Listening into questions being asked by schools during our GDPR surgeries on the stand, the same questions kept coming up: “Who holds my data?”; ”Where does my data go?”; ”Is Groupcall compliant?”. With under 4 months to go until GDPR Zero Hour, the education sector is going to go kicking and screaming past the post, with many schools not having taken the subject seriously until it’s very late and vendors not fully understanding their obligations.

There are reports of some companies using GDPR as a scare tactic, hoodwinking already panicked schools into spending money on things they simply don’t need – lest they leave themselves open to huge fines. During a session hosted by Groupcall in the main arena, our DPO and GDPR guru Steve Baines said: “The big one is the fines: 20 million Euros. Guys, it’s not going to happen. The Information Commissioner’s Office has never given a fine to a school.”

This was the perfect opportunity to get the GDPR message right – and many swung and missed. I’m grateful that our colleagues at Groupcall and our partner company GDPRiS (GDPR in Schools) were there to pick up the bat…

Delivering Wow on the Grand Stage

Apart from GDPR there was lots more to do with data. Bett 2018 saw the launch of Groupcall Analytics, a dashboard, primarily for Multi-Academy Trusts to visualise data from multiple sources in a single place.  With the ability to slice and dice that data they will be able to spot trends in individual schools or across multiple schools. And this looked stunning! The sheer power to extrapolate data and uncover insight about your organisation, just by using the raw data you have available but presented in a way that, otherwise we could not visualise is mind-blowing. This insight and the decision-making power associated with them, will cascade down to make a telling impact in every school and for every head teacher, teacher and student across the country.

I was delighted by the positive feedback we received on updates to the products I manage (Messenger, Emerge, Xpressions, PayOurSchool). Some features we knew would be popular, such as the Class Layouts feature in Emerge Desktop and the brand-new interface for Xpressions. I was also pleasantly surprised by how schools want to use certain features, namely the Custom Merge Field and the new eCards & eMail Merge features in Xpressions, essentially turning Messenger into a send anything platform – even reports!

The cost of BETT is astronomical, not just in terms of money but resources and focus – all of which could quite easily be spent elsewhere. BETT was wildly successful for us and for many, and I am sure we’ll see announcements of record footfall from organiser – lovely.

It was great for those that could make it to London, chose to make it to London, were allowed out of school to go to London. For the larger majority that couldn’t, they have missed an opportunity to speak to their existing vendors, meet new vendors, gather information on GDPR, consider alternatives, nurture new ideas, learn about new trends – all in one place. Is it time for more events, to take place elsewhere, throughout the year, throughout the country, to give better opportunity to schools in the North, in Scotland, in Wales, to see what is going on?

Which leads to the second problem: not turning up to BETT for vendors is pretty significant, particularly if you are as well established as say the big MIS suppliers, Microsoft, Google, Intel, us at Groupcall. Some MIS vendors didn’t turn up for years, claiming that they were better spending the money elsewhere – inevitably questions about their future were asked. The same was true of some Messaging providers, or data providers who have never had a stand, and questions are asked about their commitment to the schools market. Irony of ironies, if they had a stand, or even a space with their name in colours and lights, said questions would be few and far between. Because as much as BETT is about the interaction, it is as much about the presence, the brand awareness, the name in lights for a few days.

And to sign off, if you are wondering about the Breaking Stands reference, our Chief Marketing Officer has insisted I am rolled in bubble wrap next year after breaking a sofa on Day 1 (which Sir Bob Geldof, a co-founder of Groupcall, then almost fell through!), breaking a literature stand on Day 2, and almost breaking a colleague’s head on Day 3 – stress balls are tougher than they look.

By the way – if you would like to see my pre and mid BETT odyssey, you can view my BETT highlights video here on GCTV.

Groupcall have also produced a GDPR eBook, designed to help schools on the pathway to GDPR compliance. This detailed resource is completely free to download and can be found here. 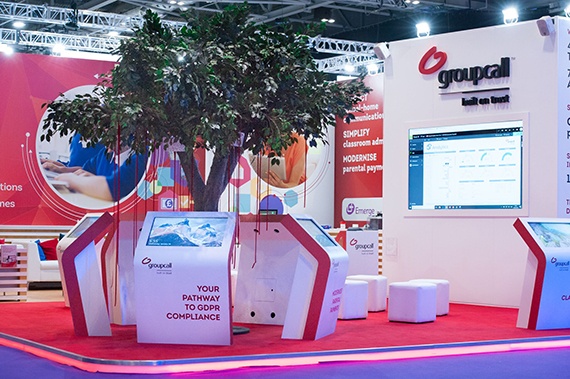