Groupcall commissioned a large-scale research survey that was sent to schools and parents, with a view to evaluating the effectiveness of parental engagement– as seen by parents and the schools themselves. As you might expect, there were sections where all parties aligned and some where they differed radically. While the entire report is available for download here, this is the first in a series of six articles that analyses the implications of the results.

The first of these topics deals with the level of engagement between parents and schools, comparing the opinions of parents to those of senior leaders and analysing the gaps.

Are parents engaged on a day-to-day basis?

All schools naturally engage their parents in some way, shape or form, but what was important to gauge was the level of engagement. Parents were asked how involved they feel on a day-to-day basis, with senior leaders scoring their own perceived effectiveness at engaging parents: 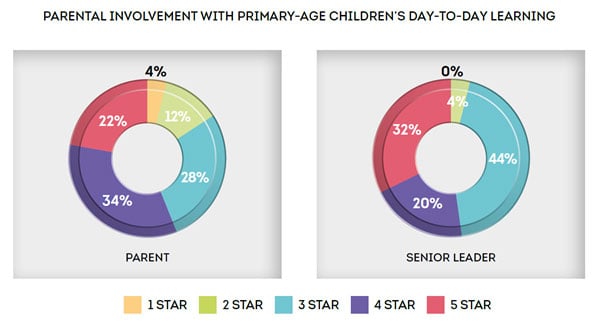 As can be seen, the number of parents that give 5 star ratings dwindle in comparison to senior leaders, suggesting that schools are over-estimating the effectiveness of their parental engagement. However, there are a substantial number of parents who answered with 4 stars, which indicates they are happy with the engagement they receive. The ‘eyebrow raisers’ come from the one star ratings, where no senior leaders scored themselves. The parents that did so were in a minority, 4% of primary schools and 10% of secondary schools, but this raises an important question: how out of touch are senior leaders with the most disillusioned parents?

What communications channel do parents prefer?

All participants were asked about parents’ preferred method of communication. Do they believe schools need to progress with technology, or are current systems just fine? 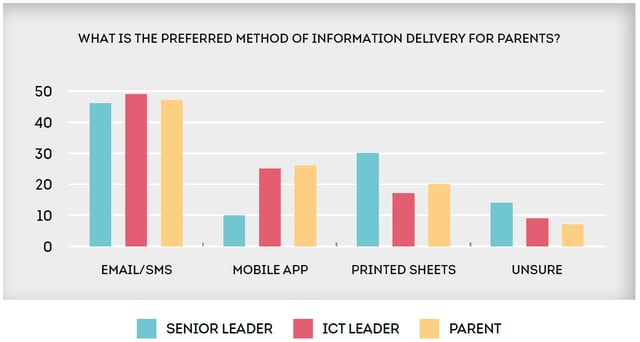 It is worth flagging those bars for SLTs on the ‘Unsure’ category. Roughly 15% of senior leaders claim to be unsure what methods of communication would be preferred, which is slightly concerning.  Given senior leaders are responsible for managing the school as a whole, shouldn’t they all have a keen understanding of how parents prefer to be communicated with? While all parties agree on email and SMS being the best way to communicate, primary school leaders seem to misjudge the parents’ reluctance to continue with paper, something that will need addressing as technology continues to become prevalent. A surprisingly large 30% of leaders express confidence in printed sheets, whereas only 10% single out mobile applicationsCuriously, secondary schools invert this trend towards technology, with teachers appearing eager to embrace new tech while parents aren’t as fast moving.

How effective are schools at assisting parents to help their children with homework?

Receiving help from home is a well-established factor in improving a child’s attainment. For some parents, being able to help isn’t always so simple. This could be due to lack of time, lack of understanding of the homework set or something else entirely, but often schools have it within their power to provide the parents with the assistance they may need to help the child at home. The question is, just how often do they do this? 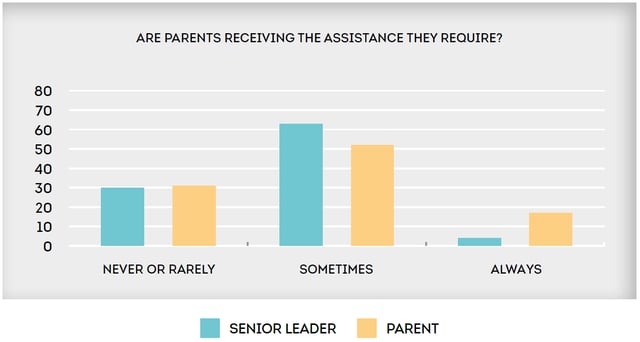 For primary schools, 19% of parents give a ‘Never’ response, compared to 22% saying ‘Always’. The bulk, at 59%, sit in the middle, with senior leaders putting their schools in much the same territory. If ‘Sometimes’ is deemed an acceptable level, then schools can rest easy, knowing they are doing a good job. It should be noted that a higher proportion of SLT gave themselves the top rating than the bottom, despite parents being broadly balanced.

In secondary schools, the results are much more polarising. Some school leaders are very much guilty of not giving themselves enough credit; a paltry 5% indicate that they always deliver assistance, compared to nearly 20% of parents who seem thrilled with their output. All is not rosy though, as from both parents and SLTs, a worryingly large 30% suggest that assistance is rarely or never provided.

So how do the opinions differ between parents and senior leaders in schools?

The results from the survey suggest there are many instances when parents are expecting more. The fact that so many senior leaders seem happier with how their school performs hints at a wider issue; that of senior leaders being slightly out of touch with the views of parents. This is not to imply that the situation is dire; indeed, there are some areas in the survey where schools excel, but clearly some work is needed to reconnect with parents.